Let There Be Light

Ever since the GPOA installed the replacement fountain in the pond alongside Greenbrier Parkway, folks have been saying, “Wouldn’t it be nice if the fountain were lit up at night?”  Well, now it is!

The first weekend in November (2020), Geoffrey Smith and Terry West set off in U.S.S Stafford (Bill Stafford’s john boat).  They paddled to the fountain.  Then they pulled up all the lines that tethered the fountain to cinder blocks placed on the pond’s bed.  This was the system they used to hold the fountain in place.  They replaced the lines with stronger line to ensure that the added weight of the light kit wouldn’t cause the fountain to pull loose and replaced the cinder blocks on the pond bed. Next, they ran the electrical lines, and snaked them through the PVC piping to the electrical box on shore.  They flipped the switch, stepped back, and there it was in all its glory… a beautiful fountain lit from below. Ah-h-h, what a sight!

Geoffrey and Terry are both GPOA Board members.  The 2-1/2 hours they invested on the weekend will provide a beautiful after-dark sight for all the residents of Greenbrier and their guests for years to come.  Thank you, Geoffrey and Terry.

P.S. Geoffrey was also the one who removed the Greenbrier sign on the right-side of the Greenbrier Parkway and restored it to its former glory.  He has plans to do the one on the other side next. 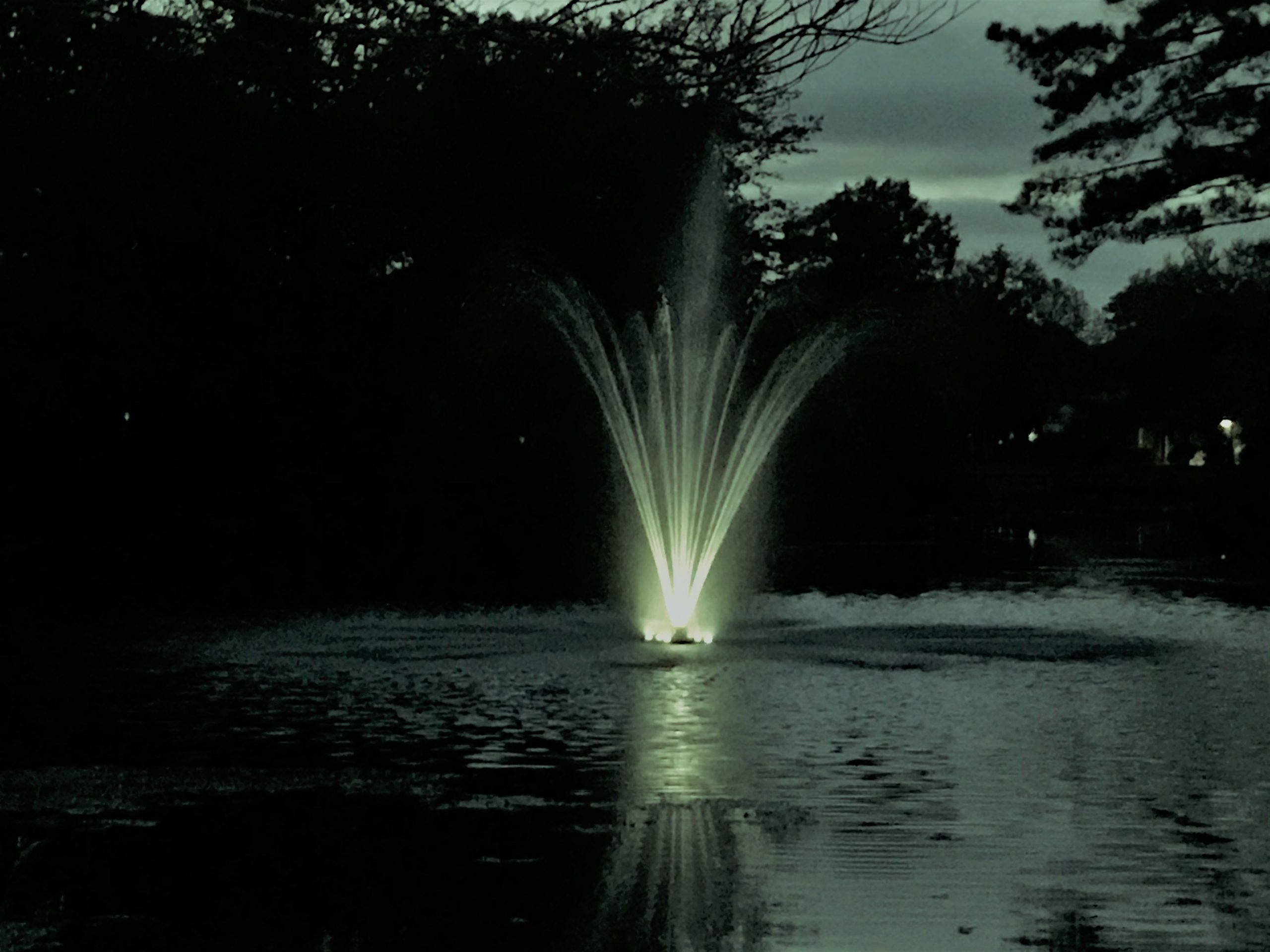 After a sold-out Lewis ‘n’ Clark Valentine’s Day concert in February, Covid-19 brought the Greenbrier social scene to a screeching halt.  One by one, the GPOA cancelled the events planned to bring friends together.  Gone was the Easter Egg Hunt; gone was four Burger Nights and the family 4th of July Golf event and Barbecue; […]

The GPOA’s Welcome Committee hosted its third annual reception for our newest neighbors who have bought a home in Greenbrier over the last year. Invitations were sent to just over sixty households. On Thursday night, October 24, 2019, more than sixty new residents plus members of the Welcome Committee and the GPOA Board gathered for […]

If you want to be notified when new material is posted to the website, follow the instructions at the bottom of the Home Page and subscribe.

A Celebration of Art

A big Thank You to all those who made the Art and Craft Exhibit such a wonderful event on Sunday August 18: the 22 artists; Jerry Briele, Chef Denise and the staff of The Emerald; DJ Karl Allgauer; the Exhibit Committee under the leadership of Mandy Chew including Sally Kiely, Verna Kuyper, Bob and Debbie […]

Perhaps you’ve heard rumblings, perhaps you know, or perhaps you haven’t a clue that a plethora of Greenbrier artists crank out masterpieces on a daily basis. All connected by a common thread of creativity, they generate works of art that titillate the senses and offer pure joy. The following four will participate in the Arts […]

Look how lovely the new wall at the Greenbrier Parkway entrance looks!

Thank you to Bill Stafford for handling all the tedious details with the insurance company so the money was in hand to make this happen. Thank you to the Ad Hoc committee that met early this year and presented several options. Kudos and a thousand thanks to Marilyn Hughes, who took on the volunteer job […]

In 2005, some members of the GPOA Board attended a conference in Wilmington, NC, about HOAs. They returned to Greenbrier and told the Board that “a STRONG [their emphasis] suggestion at the seminar was that all residents should have copies of the By-laws.” One of the suggestions floated to remedy that situation was the idea […]

Gail Zarello, Verna Kuyper, and Sally Kiely show off their work. One would expect that women in a garden club would have a knack for floral arranging and our Greenbrier Home and Garden Club members do not disappoint. Their latest creations claimed the spotlight at the July 4th Celebration. They mixed store-bought daisies and carnations […]